In this article, we focus on one of the functions of the NumPy module in Python ie Numpy round_. NumPy package mainly focuses on routines for processing of array and Numpy round_() is utilized to return the round value of array elements.

What is NumPy round_?

Numpy Round is a mathematical function of the NumPy module used in a python programming language. It is used for manipulating Numpy arrays.

To be more specific NumPy round rounds numbers. eg: np.round_(3.18) will return 3, as 3.18~3. When applied to a 1-dimensional array of numbers it will apply np.round_() to each element of the array. 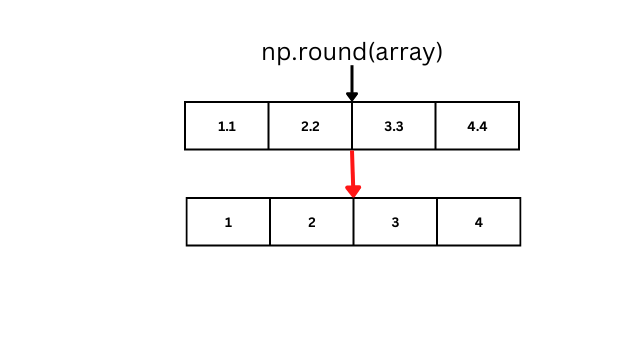 Note – here we have imported NumPy as np thus using its alias during implementation.

An array containing all the array elements which are rounded off having the same data type as input.

Below is the code used to implement np.round_() function to calculate the round-off values of each element of the input array.

In the output, an array containing 3 round-off values is returned. As the numbers to be rounded is followed by a number smaller than 5, we round the number downwards.

6, 5, and 8 (digits after the decimal in the input array) are greater than 5 thus leading to upward rounding of the result and we will get an output as the next integer to the float value.

The negative sign doesn’t have an adverse effect on the rules. We can follow the same as for the positive numbers and get the nearest rounded integer.

Example 4. Rounding an array to a specific decimal

Specifying the decimals (int the parameter decimals)allows us to manage the precision we want after rounding.

In this article, we learned the NumPy round_ function and how to utilize it to round off elements in an array to a specific decimal.